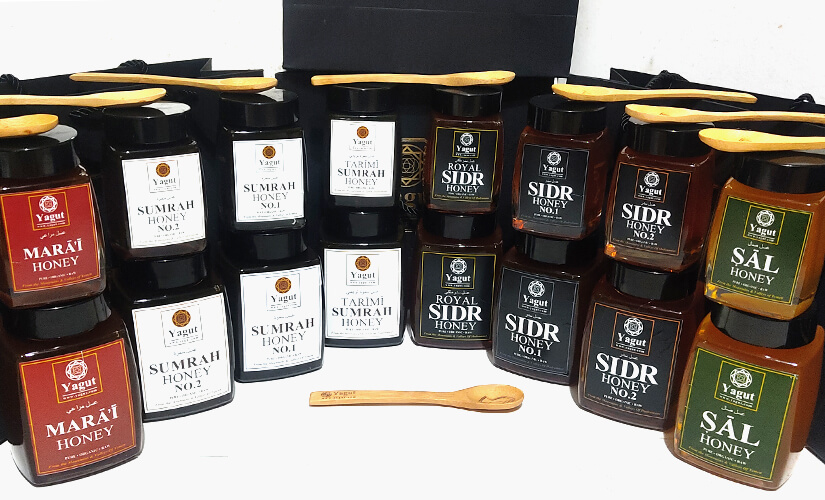 We offer various types and grades of Yemeni honey, all of them straight from the deserts and mountains of Yemen; raw, unpasteurized, and organic. From the famous luxurious Sidr honey (Bughyah) fit for royalties and sheikhs, the all-rounder Sumrah honey at the middle ground, Ṣāl for the go-to therapeutic and respiratory treatments, to Marā’ī the year-round wildflower honey. All of them are energy-providing, mind-refreshing organic food, with natural flowery aroma and luscious tasting, packed with nutrients, antioxidants, antibacterial and antifungal properties.

Yemen has always been well known to harvest one of the best honeys in the world, if not, the best! There is no debate on that. Often compared to top-grade Manuka honeys with at least Unique Manuka Factor (UMF) 10 and above, top-grade Sidr honeys or Royal Sidr honey, also known as Bughyah honey or sometimes called the ‘Liquid Gold’ is on par or even better, especially when it comes to the fine texture and luscious taste of Yemeni Sidr honey.

Sidr trees are also mentioned in the Quran, in Surah An-Najm as one of the plants of Paradise. They have numerous benefits, where the entire parts of the tree from the roots, barks and leaves have been used by the Arabs for hundreds of years for health, beauty and skin care products. Their fruits too have high nutritional values.

Other types of honeys produced from Yemen does not lack much in their nutritional and medicinal benefits, thanks to the bees extracting their nectars from the abundant specific types of trees which makes these honeys unique in their taste and benefits. These trees grow extensively, uncultivated in the wild without any use of fertilizers, chemicals or pesticides within the unpolluted mountains and deserts of Yemen. This ensure enough supply of high- quality organic nectars for the bees thus making the honey produced to be organic, very potent and of high quality, getting their properties from the trees where the nectars were extracted.

Yemeni Sidr honey is harvested mainly from Hadhramaut, the Southern regions of Yemen, the most famous of them all being Wadi Do’an or the Valley of Do’an. There are also other valleys where Sidr honey is being harvested from, like Wadi ‘Amed, Wadi Zahab, Wadi Bin Ali and many other valleys within Hadhramaut. Other types of honey are harvested in various regions including, Tai’z, Ibb, Ba’adan, and even Tarim which is known for producing saints and scholars. In fact, Tarim produces one of the best Sumrah honey within Yemen.

Yemeni honeys like Sidr, Sumrah and Ṣāl are seasonal, hence their scarcity and high price, especially Sidr honey which is highly sought after, while some like Marā’ī, are wildflower honey which can be harvested all year round, hence fetching a lower price range and with variations of tastes depending on what’s in bloom.

Yagut Yemeni honey are harvested and extracted using simple tools and manual labor without the use of machines or chemicals. They are then poured into containers, raw, unheated and unprocessed, hence preserving its unique aroma, taste and nutritional benefits. After being graded, the honeys are then shipped to us for packing and distribution.

There are numerous benefits of Yemeni honeys. In general, they are packed with antioxidants, antibacterial and antifungal, heal wounds, boost immunity, aids and improve digestion and gut health, relief and cure for sore throat and many more. Try them now to find out!

Sidr honey, also known as Baghiyah honey is a mono-floral honey produced by bees extracting their nectars exclusively from flowers of Sidr trees (Ziziphus spina-christi), also known as Lote tree, Christ’s Thorn, Jujube or Nabkh tree. These trees can be found across the Middle East and grow extensively in Yemen especially in the South.

Sidr trees are also mentioned in the Quran, as one of the plants of Paradise. They have numerous benefits, where the entire parts of the tree from the roots, barks and leaves have been used by the Arabs for hundreds of years for health, beauty and skin care products. Their fruits too have high nutritional values.

In Yemen, especially the Hadhramout region, these trees grow extensively, uncultivated in the wild without any use of fertilizers, chemicals or pesticides within the mountainous valleys. This ensure enough supply of nectars from Sidr trees for the bees and makes the honey produced within the region to be very potent.

Yemeni Sidr honey is harvested mainly from Hadhramout, the Southern regions of Yemen, the most famous of them all being Wadi Do’an or the Valley of Do’an. There is even a song titled ‘Asl Do’an (Honey of Do’an) by the famous legendary Saudi singer Abu Bakar Bin Salem Balfagih who originated from Tarim, Hadhramout. There are also other valleys where Sidr honey is being harvested from, like Wadi ‘Amed, Wadi Zahab, Wadi Bin Ali and many other valleys within Hadhramout and other parts of Yemen, where populous Sidr trees can be found.

Sidr honey produced from Yemen have a unique, raw, thick, luscious taste and packed with nutrients thanks to the natural mountainous desert environment of the valleys where these Sidr trees grow.

Sidr honey is harvested only once a year, in the winter season, making the supply limited. They are harvested and extracted using simple tools and manual labor without the use of machines or chemicals. They are then poured into containers, raw, unheated and unprocessed, ready to be distributed, hence preserving its unique aroma, taste and nutritional benefits.

Yemeni Sidr Honey or sometimes referred to as ‘Liquid Gold’, is highly priced for its manual harvesting process and scarcity. It is arguably the best honey in the world due to its medicinal properties, unique taste and aroma. They are packed with antiseptic, antibacterial, and antibiotic properties. The only competitor on par with it is we would say high grade Manuka Honey which is also highly priced and packed with medicinal properties. However, comparing the aroma and taste of the two, we would personally stick to Yemeni Sidr Honey. Try it for yourself and you be the judge.

Sumrah honey is also a mono-floral honey produced by bees extracting their nectars from flowers of the thorny Sumar trees (Acacia). These trees can be found in abundance in Yemen.

Yemeni Sumrah honey is harvested from many locations in Yemen, including the Hadhramout region, Tai’z and Sana’a, while ours is straight from the blessed land of Tarim. Yes, you heard that right, Tarim do not only produce saints and scholars, but high-quality honey too! In fact, it is one of the best qualities of Sumrah honey you can get hold of thanks to populous growth of Sumar trees there and its unpolluted environment, adding to the Barakah of the land of thousand saints.

Sumrah honey is packed with nutrients and is very popular amongst the locals due to the lower price range and nutritional properties which are comparable to the Sidr honey.

BENEFITS OF SUMRAH HONEY
• Strengthens the body’s immunity system.
• Strengthens the heart
• Good remedy for diabetes, as it drives away sugar in the body and replace them with its natural insulin that the body needs
• Enhance bone growth in children
• Stabilizes body temperature
• Cleanse the colon from toxins and facilitate digestion to prevent constipation
• Stimulate production of Antibody
• Helps recovery from Hepatitis
• Helps reduce joint pain
• Reduce and prevent lung infections and inflammations (when mixed with a little cinnamon)
• Prevents hair loss (when rubbed onto the scalp)

Ṣāl honey, sometimes known as the Spurge honey is a mono-floral honey produced by bees extracting their nectars from a type of cactus plant; Euphorbia Ammak. This cactus plant is also known as Al-Aseel amongst the locals in Yemen, hence the name Ṣāl which the honey has adopted. Ṣāl trees are now found scarcely in Saudi Arabia and South Yemen, but still dominant in the mountainous region of West and North Yemen like Tai’z and Ba’adan where these honeys are often harvested. Ṣāl honey is rare and are harvested in low volumes and only when they are in season.

The spicy and gingery taste of Ṣāl honey is very unique, due to the presence of a number of active substances such as flavonoids, caltamerxin, potassium, magnesium, calcium, sodium and tatin present in the tree where the bees extracted the nectar from.

Ṣāl honey is the best type of go-to honey to treat respiratory problems, or just to freshen or sooth up the throat. The presence of its potent ingredients to fight bacteria will leave a strong, refreshing, spicy, tingly aftertaste that can last in the throat for some time. It is honestly one of our personal favorites.

Next time you are looking for a cough syrup, but don’t want those chemicals entering your body, try Ṣāl honey instead. You will be surprised of the soothing sensation it gives.

How to Consume
• Take a spoonful or two before bed or right after bed.
• Mix a spoonful or two of Ṣāl honey with warm water, stir well and drink it twice a day in the morning and evening; a quarter of an hour before meals or two hours later.
• Can be used as a sweetener for drinks and foods, or in any way you like.

Marā’ī honey is a multi-floral honey produced by bees extracting their nectars from various flowers including Sidr, Sumar and other wildflowers within the region.

Marā’ī honey, also known as the Yemeni wildflower honey, is harvested in various locations in Yemen throughout the year and has a delicate taste that varies from year to year based on what’s in bloom.

Marā’ī honey has a fresh, floral taste but thick in texture and is lighter in color. This honey is still packed with nutrients and benefits, suitable to replace your sugar-loaded table honey thanks to its much lower price. So next time when you plan to look for the cheap table honey you use for breakfast and toppings try this instead, you won’t be disappointed!

How to Consume
• Can be consumed everyday 1-3 spoons.
• Can be used as a sweetener for drinks and foods, or in any way you like.