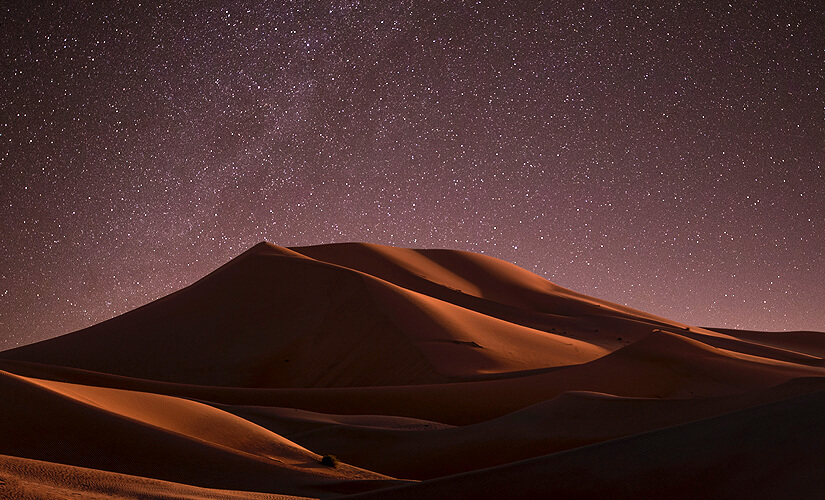 The Night of the Heavenly Ascension (Mi’raj) – Sheikh Muzaffer Ozak

Saddened by the despicable treatment he had received during the day, our Master prayed before lying down to sleep. His blessed heart ached and his eyes were moist with tears. He had barely dropped off to sleep, when the Lord of Majesty said:

“O Gabriel, do you know what night this is? Tonight, convey my command and good tidings to all My worlds! Tonight I shall take My beloved to My station. My Heavens, My Lotus Tree, My Prosperous House, My Throne, My Footstool and My Paradise will be adorned with the dust of My beloved’s feet. Tell Israfil to leave his trumpet tonight; I have commanded him to wait at My beloved’s service. Let Michael postpone the distribution of provisions. Let ‘Azra’il leave the gathering of souls for tonight.

To them and to you I have granted the honor of serving My beloved. For tonight, let Malik put out the fire of Hell. Let the wardens of Hell not stir from their places. Let My Paradise be decked out afresh. Tell Ridwan that the houries, pages and attendants must make ready. Let them wear new heavenly clothes and put on their finery. They must get ready to receive My beloved. Tonight I have invited My beloved Muhammad. Let them clothe the sun in the empyrean. Let the sky be more splendidly arrayed than on an ordinary night.

Let the stars shine brighter than usual. Let the souls of the Prophets prepare to greet Muhammad! O Gabriel, go to Paradise and fetch for My beloved a splendid robe, a crown, a belt and the heavenly steed called Buraq. Let him don the robe, set the crown upon his head and gird himself with the belt. Let him mount Buraq; let him ride to see My Throne, My Footstool and My Paradise! Give My salutations to that Messenger! He is now lying in the home of Umm Hani’, sad and dismayed by the cruelty of those unbelievers.

“Let him come! Let him behold My Throne, My Pedestal and My Paradise. Those unbelievers have been saying: ‘You are poor, while we are rich. Might and power belongs to us. You have no friends except beggars and slaves.’ O Gabriel, who is really poor, who is rich, who is mighty, who is humble, who is temporary, who is enduring? Tonight, I shall bestow on him My grace and favor as I have not done, and shall never do, for any other Messenger and Prophet. I shall show him the favors I have prepared for his Community. O Gabriel, he is very precious to Me. He is a mercy to eighteen thousand, to eighteen million worlds. Had I not created him, I would not have created this universe. His eulogist am I.

For him I created My all. For Myself I created him. I am witness to his Prophethood. He is Mine and I am his. O Gabriel, treat him politely; let your kindness tonight be greater than on any other night. You spent twenty thousand years performing a prayer of two cycles for Me. No servant of Mine ever did Me such worship. As your reward for that worship, I have granted you the favor of serving My beloved tonight.”That venerable Gabriel went to Paradise, where he saw that the heavenly steeds were pasturing in herds. They were all happy and content, except for one Buraq, which was pale and wan. It stood weeping in a corner, its face streaked with tears and bearing the mark of love.

The venerable Gabriel approached the poor beast, wondering at its condition. “What is the matter with you? Why don’t you eat or drink? Why so pale and wan? This is paradise, the abode of happiness; there is no weeping, no sadness here.” Buraq found the words to say: “I am stricken with the pain of love. My love is my constant companion. I have not seen him, but I have heard his name. That name is my remedy. If I see his beauty, my face will brighten with joy.

I have been in this state for thousands of years. I heard a voice crying: ‘O Muhammad!’ From that moment, I have been in love with the owner of that name. You see me here in Paradise, the abode of happiness. But this is only my outer form; in reality, I am in the fire of separation. Love is my bounty, tears my joy. These are the faithful witnesses to my love. My paleness and wanness are my delight, my streaming tears the token of my love. Surely this pain of mine will lead me to its remedy. One day it will unite me with my loved one. My pain has become my remedy.”

“Good news, O Buraq!” cried Gabriel. “Tonight I shall lead you to your beloved. Your steadfast patience in love has brought you to the one you love. That most holy being is not your beloved alone; all creatures have been created for love of him. The Lord of All Worlds is his lover also, as are the Footstool, the Tablet, the Pen and Paradise. His lovers are without number. Just as your love for him has now brought you to him, so will their love unite them with him one day; this condition of yours is certain proof of this.

“They say the lover is with the loved one. Come on, Buraq, let’s be on our way to your beloved Muhammad…” In one moment of time, they had reached the city of Mecca and arrived at the Ka’ba. All the other noble angels came too, and Mecca and the sky above it were filled with the angel hosts.

This was a most important night. On this night, Allah would show His beloved wonders peculiar to His Essence of Divinity, admitting him to the mystery of the Two Bow-lengths, a station inaccessible to any other creature. The Chosen Messenger would be allowed to witness marvels hidden from the sight of creatures and of angels, even those angels near the Throne. On this night, he would be brought to the “Palace Beyond Space.”

There, each pain would find a thousand kinds of remedy. The sins of God’s servants would be forgiven, for love of His beloved, and the entire Community of Muhammad would be delivered from the Fire and granted Paradise; the mystery of the Two Bow-lengths would be revealed and the Unity of the Divine Essence made known.

From the manifestation of the Attributes, the manifestations of the Essence would be revealed. Lover and beloved would be united. He would be shown the stations of all Messengers; he would lead the souls of the Prophets in worship; he would pass beyond the Station of Gabriel. All the sinners of the Community of Muhammad would be delivered from the Fire and given to the Messenger. He would learn the secret of “and your Lord will surely give to you.” (93:5) The Almighty would address ninety thousand words to His beloved. Mysteries would be revealed, such as no tongue could tell and no pen could write.

According to Ibn ‘Abbas our Master said: “I had just worshipped and gone to bed. Realizing that Gabriel had come, I sat up in my bed. I saw Gabriel standing there saying: ‘O Messenger of Allah, greetings to you from Allah.’ He invites you tonight. I have come to fetch you. This night, the All-Glorious One will do you great honor; no one before you ever attained such exalted grace and favor, not will such blessedness be conferred on anyone after you. No one ever saw or heard of such grace and favor as will be yours tonight. Let us go now, for your moment has arrived. Tonight, you are the guest of the King. No predecessor ever deserved such bounty, nor will any successor be able to achieve such exaltation.”

The venerable Moses conversed on Mount Sinai with the Lord whose Existence is Necessary. “My Lord”, he begged, “Show me Your Beautiful Countenance. Let me see. Let me behold Your Beauty!” But he was told: “Moses, you cannot see Me; you are incapable of seeing Me! But look at the mountain. I shall manifest to it. If the mountain can bear My manifestation, you will be able to do so too.” But the mountain could not bear My manifestation and it dissolved into pieces. The venerable Moses fell in a faint. When he had recovered consciousness, he said: “My Lord, I declare You exempt from all attributes of deficiency; I qualify You with the attributes of perfection. To You I repent. Without seeing You, I am one of the first to have faith in You.” Moses, the Converser, wished to see. But he had been unable to see. Now, God Almighty desired to show Himself to His beloved.

How this might be, we cannot know; the manner of it is known only to Allah. The six directions do not apply to Him; He is unquantifiable and His modality is unknown to us. Existing beyond direction, location and time, He would show Himself to His beloved. Yet this He would promise not to His beloved alone, but also to us sinners, the members of his community. Some highly honored faces will behold the Beauty and Perfection of the Lord at the Resurrection. We shall be granted this favor. To see Him, however, the eye must be prepared. As for those who do not see truth and reality in the world below, the Qur’an tells us that they will not see the Lord of the Worlds; those who turn their backs in the Qur’an and on His beloved will be resurrected blind. That sight belongs to the eye that weeps for God’s sake, to those who observe reality and truth.

The Messenger gave his Companions the good tidings: “You will see your Lord from the Garden of Paradise, just as you behold the full moon on the fifteenth of the month!” In other words, the divine manifestation will be apparent to each believer according to his capacity.

As we have said already, the manner of this is beyond our knowledge; it is known only to Allah. God is exempt from spatial location. He will show Himself to the believers, and the believers will see Him. As Allah wills… May Allah bestow His grace upon us all. Amen, For the sake of the Chief of the Messengers.