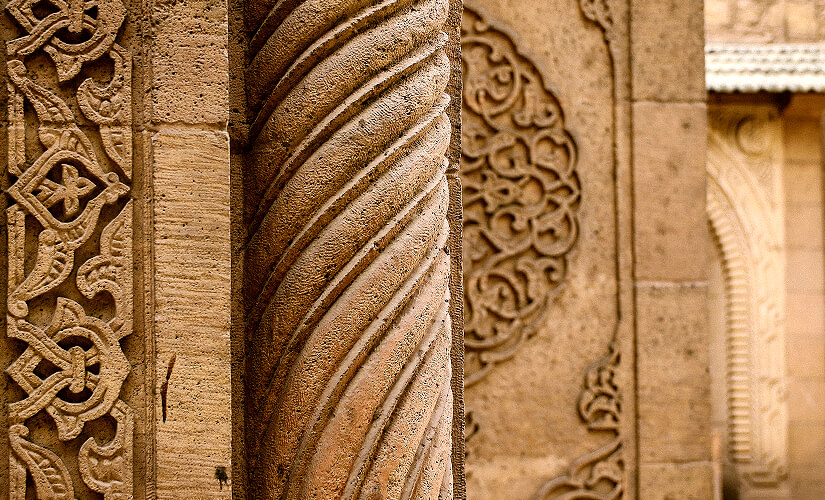 The Shaykh (may Allah be well pleased with him, and grant him contentment) said:
Step out of your own self and keep your distance from it. Practice detachment from your possessiveness, and surrender everything to Allah. Become His doorman at the door of your heart, obeying His command by admitting those He instructs you to admit, and respecting His prohibition by shutting out those He instructs you to turn away, so that you do not let passion back into your heart once it has been evicted. Passion is expelled from the heart by resistance to it and refusal to follow its urges, whatever the circumstances, while compliance and acquiescence allow it to gain entry. So do not exert any will apart from His will, for anything else is your own desire, and that is the Vale of Folly, where death and destruction await you, and falling from His sight and becoming secluded from Him. Always keep His commandments, always respect His prohibitions, and always submit to what He has decreed. Do not associate Him with any part of His creation. Your will, your passions and your carnal appetites all belong to His creation, so refrain from indulging any of them lest you become a polytheist. Allah (Exalted is He) has said:

Whoever hopes to meet his Lord, let him do righteous work, and make none sharer in the worship due unto his Lord. (18:110)

Polytheism [shirk] is not merely the worship of idols. It is also polytheism to yield to your own passionate desire, and to equate with your Lord anything whatsoever besides Him, be it of this world and its contents or of the Hereafter and what is contained therein. What is besides Him (Almighty and Glorious is He) is other than He, so when you rely on anything other than Him you are associating something else with Him (Almighty and Glorious is He). Therefore be wary and do not relax your guard, be fearful and do not develop a sense of security, and keep your wits about you so that you do not become careless and complacent.

Do not attribute any state or station to yourself, and have no pretensions to such things. If you are granted a special state, or elevated to some station, do not become identified with that in any way at all, for Allah is every day about some business, effecting change and transformation. He may intervene between a man and his heart, thereby separating you from what you had professed to be your own, and making you different from what you had imagined to be your fixed and permanent condition. You will then be embarrassed in the presence of those to whom you made such claims, so you had better keep these things to yourself and not convey them to others. If something does prove stable and lasting, acknowledge it as a gift, pray for the grace to be thankful, and keep it out of sight. But even if it turns out otherwise, it will still bring progress in knowledge and understanding, enlightenment, alertness and discipline. Allah (Almighty and Glorious is He) has said:

Such of Our revelations as We abrogate or cause to be forgotten, We replace with one better or as good. Do you not know that Allah has power over all things? (2:106)

So do not underestimate the extent of Allah’s power, have no misgivings about His planning and His management, and never doubt His promise. Take as your model the fine example set by Allah’s Messenger (Allah bless him and give him peace). He experienced the abrogation of verses and chapters revealed to him, adopted in practice, recited in the niches [of the mosques], and written down in books; as they were withdrawn and changed and replaced by others, the blessed Prophet was moved to accept the new revelations. This applies to the external dispensation of the law. As for the inner aspect, the knowledge and spiritual state experienced in his own relationship with Allah, he used to say: “My heart gets coated with rust, so I beg Allah’s forgiveness seventy times each day” (“a hundred times,” according to another report).

The Prophet (Allah bless him and give him peace) would be moved from one state of being to another, and made to traverse the stations of divine proximity and the spheres of the unseen. The robes of light conferred upon him were changed as he progressed, so that each new stage would make the previous one seem dark, marred by shortcomings and inadequate observance of the guidelines. Thus he was trained to practice praying for forgiveness, because that is the best state for a servant, and constant repentance, because this involves acknowledgment of sin and shortcoming–properties of human nature inherited from Adam (peace be upon him), the father of mankind.

When the purity of Adam’s spiritual state was stained by forgetfulness of the promise and covenant, he wished to dwell forever in the abode of peace, in the vicinity of the All-Merciful and Beneficent Friend, visited by the noble angels with greeting and salutation, but his self-will had come to be associated with the will of the Truth. That will of his was therefore broken, that state disappeared, that intimacy became remote, that station was degraded, those lights were dimmed, and that purity was spoiled. Then this chosen one of the All-Merciful recovered his awareness and was reminded. After being instructed in the acknowledgment of sin and forgetfulness, and trained in confession, he said:

“Our Lord! We have wronged ourselves. If You do not forgive us, and have mercy on us, we shall surely be among the lost!” (7:23).

Then came to him the light of guidance, the knowledge and inner understanding of repentance and its hidden benefits, but for which something formerly mysterious would not have become manifest. That old will was replaced by a different one, and the original state by another. He received the supreme consecration, and repose in this world and then in the hereafter, for this world became a home for him and his offspring, and the hereafter their refuge and eternal resting place. In Allah’s Messenger and favorite friend, therefore, as in his father Adam, the Chosen of Allah, ancestor of all dear and loving friends, you have an example to follow in confessing faults and praying for forgiveness under all circumstances.